I never knew our Uncle Alf. I only knew of him as Dad’s Dead Uncle, laying up out at the cemetery with the rest of the family. The lack of stories about him intrigues me. Here’s what I do know.

Nan’s Dad, a builder, built two houses for his two daughters in the same street, a sensible distance apart. 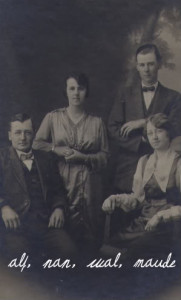 Both houses were built with their brother Alf in mind. Alf’s room at Maude’s house was the bedroom with a door cut into the sidewall straight to the outside. At Nan’s place they built a separate room for Alf that sat in the backyard. You see Uncle Alf liked a drink and it seems that he liked a drink a lot and that he liked to come and go as he pleased. It also seems that he was a bit too much for any one family member to handle. From what I’ve gathered though, from the few stories that place Uncle Alf anywhere in the picture, Uncle Alf stayed with Nan all of the time in his room out the back and that’s what suited Aunt Maude best.

At one point in all of that time, and long after Nan had buried her young husband and raised their two children, she had living with her in her two bedroom house with a sleepout, her son (my Dad), his wife (my Mum), my older sister and brother, Mum’s twin little brothers from time to time (their Mum had died shortly after birthing 10 children) and Uncle Alf out the back to boot! All the while Aunt Maude rested her heels up down the corner and had the hide to send her washing up to Nan! Rumours rumble that my grandfather had taken his turn at courting both the sisters before the war but married my Nan after the war. Maude had remained single all her life and I guess she got her revenge however she could!

Straight after I was born we moved into our own little war home up the hill but we still spent half our life at Nan’s.
By the time I was older and out there playing on my own in Nan’s backyard, Alf’s ‘accident’ had already happened and Aunt Maude was gone too. Alf’s room at Nan’s had become a dumping ground of boxes of hospital crockery, dust and unused furniture but Alf’s bed was still there. But the room had been stripped of Alf’s title and no one slept there again except for Uncle Bill. He’d lie up on Alf’s old bed ‘out the back‘ in the afternoon of a fat and lazy Christmas day, banished from the house for his snoring.

From the time I can remember it was simply called, ‘out the back’. “Here, take this out the back will you.” Playing out the back was as much about hunting for family treasures as anything. You never knew what you might find in the dusty boxes, maybe something that Uncle Alf had left behind but usually it was just white hospital crockery. The fascination of Dad’s baby basinet was out there full of pickling jars and if you lifted off all the boxes you could lie ever so graciously on my great grandmother’s even dustier old chaise lounge. She was the ferocious looking German woman that stared down on us from the picture rail over Christmas lunch.

Now, about Uncle Alf. I think there are only two more things I know of him for sure. One was that he gave my mother a cheap looking silver tray as a wedding gift that she kept hidden at the back of the buffet. I’d get into the buffet and poke around on rainy days. Pulling it out one day and asking her why we never used it, Mum said, “It was a wedding present from your Uncle Alf”. The ‘your’ was to mark him as not from her side of the family. “He won it at the races.” I remember her scorn. “Never expected him to turn up at the wedding, let alone with a present.” Nan must have made him go. Mum obviously had hoped she wouldn’t.

I got the impression from all of this that Alf’s behaviour couldn’t always be trusted at a family event and that he probably spent a fair bit of his time at the races. Not so good for a German Catholic.

The other thing I’ve already told you, that I know for sure about Uncle Alf, is that he’s dead. He drowned. However I don’t believe I ever heard the truth of how he died or even half the truth of his life. His death was a swift brush off in a tight little story, rarely told, that went, “He went fishing in a dam, got caught in his fishing line and drowned.” And that was that. As an in-law Mum could only hint to me with her eyes of her suspicion for fear of breaking some rule that had gone down that Alf’s death was not to be spoken about. Nan, the mighty matriarch had long since spoken. But his death had been recorded for future generations without a skerrick of believability. There were too many questions unanswered but that door was as surely closed as Alf was dead. You were left to ask only yourself, “Who goes fishing in a dam? Dams are for yabbies.” “How do you get so caught in your fishing line that you drown?” “Why would you be standing in the dam in the first place? You’d fish from the bank.” Surely Uncle Alf was able to save himself or did he just let himself go, I wondered. Had he been banished for the day for some reason, ‘sent fishing?’ Odds are he was drinking at the dam more than he was fishing. Maybe he just fell in drunk. I suppose only Uncle Alf knows.

Poor Uncle Alf who I never knew had been a breaking branch on the family tree that finally snapped. He never married, didn’t go to war and I can’t say I know he did anything more than drink, go to the races, win a cheap looking silver tray and drown in a dam. It ‘s clear that Alf was not as Catholic as the rest of the family and it seems he was a bit of a burden on everybody. But he was family and he always had a home with them. In the end though, he did the family the final embarrassment of dying indignantly. Poor Uncle Alf, he only has the memory of who he was, left behind by those that judged him.

We were often warned as kids,
“Watch it, or you’ll turn out like your Uncle Alf”.
“What?” I thought. “Dead in a dam?”